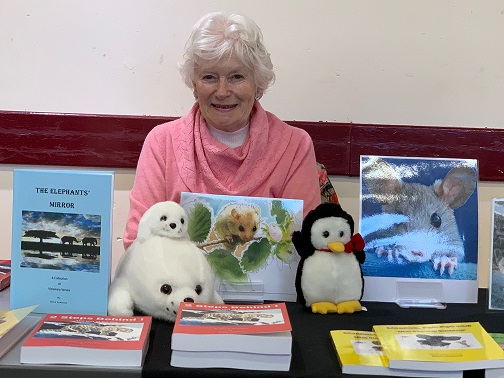 Synopsis:
Dawn began compiling a collection of poems on the world’s exotic wildlife, ‘Listen to the Animals’, which was to stress the conditions in which many species found themselves, and to focus on those species not so familiar. This was discovered by the well-known actress, author & wildlife conservationist, Virginia McKenna OBE, who wished to use it for her international wildlife charity, the Born Free Foundation.
The book ‘grew’ from humble beginnings, and the title became ‘2 Steps Behind’ (two steps behind the dinosaur), which now features 138 animals worldwide, mostly endangered, written in verse and illustrated by Dawn.

It continues to be widely appreciated, and a copy was received by HRH the Prince of Wales in 2015, who remarked that “this is a great way to educate and help conservation.” All proceeds, as well as others of Dawn’s books, go towards supporting the work which Born Free carries out worldwide for helping the world’s endangered species.

Your Presenter:
Dawn Lawrence became interested in conservation way back in 2008, when she was writing for DC Thomson, publishers for The People’s Friend magazine, with whom she has been associated for the past twenty years, producing various articles mostly aimed at wildlife, and also working on their one-time Children’s Page. she still writes for them today.